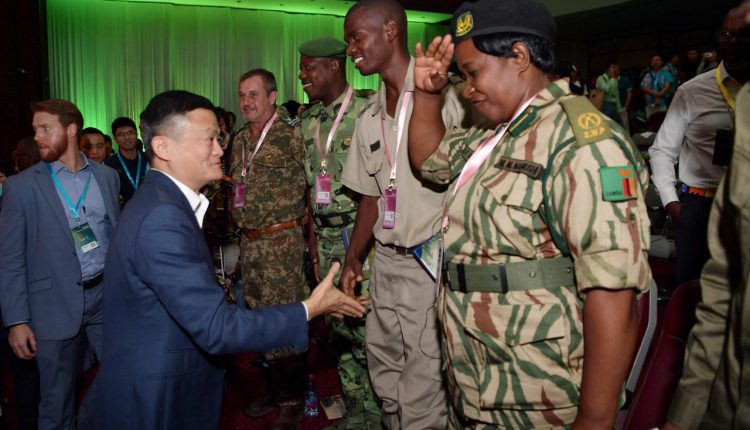 The men and women who protect Africa’s wildlife are “the real heroes” who deserve more support because conservation is “the responsibility of everyone”, Jack Ma, founder of Alibaba Group, said at the second annual African Ranger Awards ceremony.

Fifty rangers working in 17 countries across Africa won the 2019 awards, including six recognized posthumously after they died in the line of duty.

This is the second annual Awards, which will be given annually for 10 years by the Paradise International Foundation, a Chinese not-for-profit environmental conservation organization, and the Alibaba Foundation, a charitable organization established by Alibaba Group.

The Paradise International Foundation was set up by Jack Ma and other Chinese entrepreneurs, artists and philanthropists. It works to preserve the planet through charitable actions, a scientific approach, and efficient business management.

“The difference between us and you [rangers] is that we protect ourselves first then we talk about protecting the Earth,” he said. “Rangers face danger to protect wildlife; you are different. You are the real heroes.

Clare Akamanzi, Executive Director and CEO of the Rwanda Development Board, M. Sanjayan, CEO of Conservation International, and Fred Swaniker, Founder and CEO of African Leadership Group attended and addressed the event, on Friday November 15 at the Accra International Convention Centre in the Ghanaian capital.

Dozens of nominees from 17 countries were suggested by colleagues, employers, government agencies, or tourism partners. A panel of conservation leaders including Irene Amoke, Executive Director of the Kenya Wildlife Trust, Dr Max Graham, CEO of Space for Giants, and Matthew A. Brown, Africa Director of The Nature Conservancy, selected the winning list.

Many of the winners have been injured or faced significant danger in confrontations with wildlife criminals. Each received a $3,000 cash prize, given to family in the cases of fallen rangers.

Four in five African rangers had faced mortal danger at work, and three in five had been directly attacked by poachers, a 2016 survey found. More than 1,000 lost their lives protecting wildlife and wild habitats between 2000 and 2016.

“To be a park ranger is a dangerous job but we can’t leave our wild animals without protection because it can cause the extinction of all animals all over the world,” said Leonidas Mpumuje, Head Rhino Monitor working with African Parks at Akagera National Park in Rwanda, and one of the winners.

Another, Raphael Chiwindo, Senior Ranger and Construction Manager with IFAW based at Kasungu National Park in Malawi, comes from a family of soldiers. He said rangers need to be sure that they approach their work with a similar outlook to members of the armed forces.

“To be a good ranger, you need military skills, you need to be clever, and strong, and perform well,” he said. Simon Irungu, Head of the Rapid Response Unit at Ol Pejeta Conservancy in Kenya and also a winner, said “top level training” was critically important for rangers to succeed.

Mirriam Namushi is one of Africa’s growing number of women rangers, and one of the few to reach a very senior position: Area Warden at one of the continent’s largest conservation areas, the 22,400 sq. km Kafue National Park in Zambia.

She said: “We women are few in conservation at the moment, but the few that we are, I think we are doing a better job than men. We take the job more seriously, and when it comes to corruption, there is less. We are more dedicated to our work.”

Lijun Sun, Partner of Alibaba Group and Chairman of the Alibaba Foundation, said that protecting Earth’s natural resources is one of Alibaba Foundation’s core missions. “Alibaba leverages its technologies and experience in creating impact through public engagement such as the Ant Forest app, to lead efforts in environmental protection and conservation,” he said.

The Paradise International Foundation and Alibaba Foundation are sponsoring in full both the cash rewards for the rangers and the program’s management expenses for the next 10 years, expected to be $1.5 million in total.

“The challenges to protected areas are changing and increasing and there has never been more of a need for park rangers,” said Shawn Zhang, CEO of the Paradise International Foundation.

“They are soldiers fighting courageously with insufficient support, they lack basic supplies like boots, socks, tents and GPS. They are husbands and wives and parents, they are heroes risking their lives for conservation.”

Africa is home to the richest diversity of wildlife in the world, including more than 1,000 species of mammals, 500 kinds of birds and 2,000 types of freshwater fish. Poverty, bushmeat hunting, the illegal wildlife trade pose serious threats to the continent’s bio-sustainability.

Five hundred rangers will be recognized through the 10-year program. The Foundation hopes that the African Ranger Awards will continue to raise public awareness of the importance of safeguarding Africa’s diverse wildlife and creating sustainable development.